Published by René Schulte
The Internet of Things (IoT) and robotics are becoming increasingly common, especially in industrial scenarios like manufacturing where remote or hazardous environments may be a barrier to real-time monitoring but also for other sectors including service companies. This will be interesting, especially in a combination with larger IoT deployments in the context of Smart Spaces, which we covered in the previous article. For companies that don’t have a robotics standing, now is the time to get ready for the robotics revolution. In this post, we are providing some motivation to inspire you to kickstart your robotics journey and we are also sharing some examples of our work.

Automation is an ongoing theme since the second industrial revolution started in the 19th century. Now in the 21st century, it’s all about digital transformation for all areas of work including industrial applications. The Internet of Things (IoT) and robotics are becoming increasingly common, especially in industrial scenarios like manufacturing where remote or hazardous environments may be a barrier to real-time monitoring but also for other sectors including service companies. This will be interesting, especially in a combination with larger IoT deployments in the context of Smart Spaces, which we covered in the previous article. For companies that don’t have a robotics standing, now is the time to get ready for the robotics revolution. In this post, we are providing some motivation to inspire you to kickstart your robotics journey and we are also sharing some examples of our work.


Market Situation
Most of the robotics systems that are being used today are mainly stationary robots like cobots, robotic arms for welding, etc. These are typically not easy to operate and require specialized skills. Fortunately, these are getting easier to program with machine teaching. Another change that is happening is making these stationary robots move, which we see more and more with autonomous mobile robots (AMR). Predictions state by 2030, 6 out of 8 million (75%) of the robots shipped will be mobile. “The autonomous mobile robots market value was $29.3 billion in 2019, and it is predicted to rise to $220.6 billion by 2030. Furthermore, the market is predicted to advance at a CAGR of 18.3% from 2020 to 2030. The burgeoning requirement for automation solutions and expansion of the e-commerce industry are the main factors fueling the advancement of the market.”1 And it is not just manufacturing and heavy industrial sectors that will see a huge shift in robotics automation. “Thirty-five percent of service companies will introduce physical robot workers. Restaurants and other businesses can’t fill the glut of job openings for service workers. This worker shortage will not go away, even with reduced employment subsidies. Healthcare, food preparation, and warehouse jobs that typically command low wages with difficult working conditions will increase steadily over the next 10 years. Companies that depend on them will invest in service-worker automation for customer self-service, grounds maintenance, delivery robotics, food preparation, surveillance, and janitorial support, altering the low-end service-worker landscape permanently."

Will a Robot Take Your Job?

All the talk about robotic process automation (RPA) and digital process automation (DPA) raises the question- what will happen with all the employees if the machines are taking over and millions will lose their jobs? There’s even scientific work being conducted to estimate how likely it is that a job will be automated. Researchers from the Ecole Polytechnique Fédérale de Lausanne used employment statistics on 1,000 jobs and revealed which jobs are most likely to be taken by robots. For example, meat packers, builders and cleaners face the highest risk of being replaced by machines, but teachers, lawyers and physicists are least likely to be substituted. The EPFL researchers put their findings into an online tool where a user can select a job and it will show what the automation risk index is and what resilient alternatives are. As can be seen in the screenshot below, even software developers do not have a low chance of being replaced by AI software developers. You can try the tool yourself here. 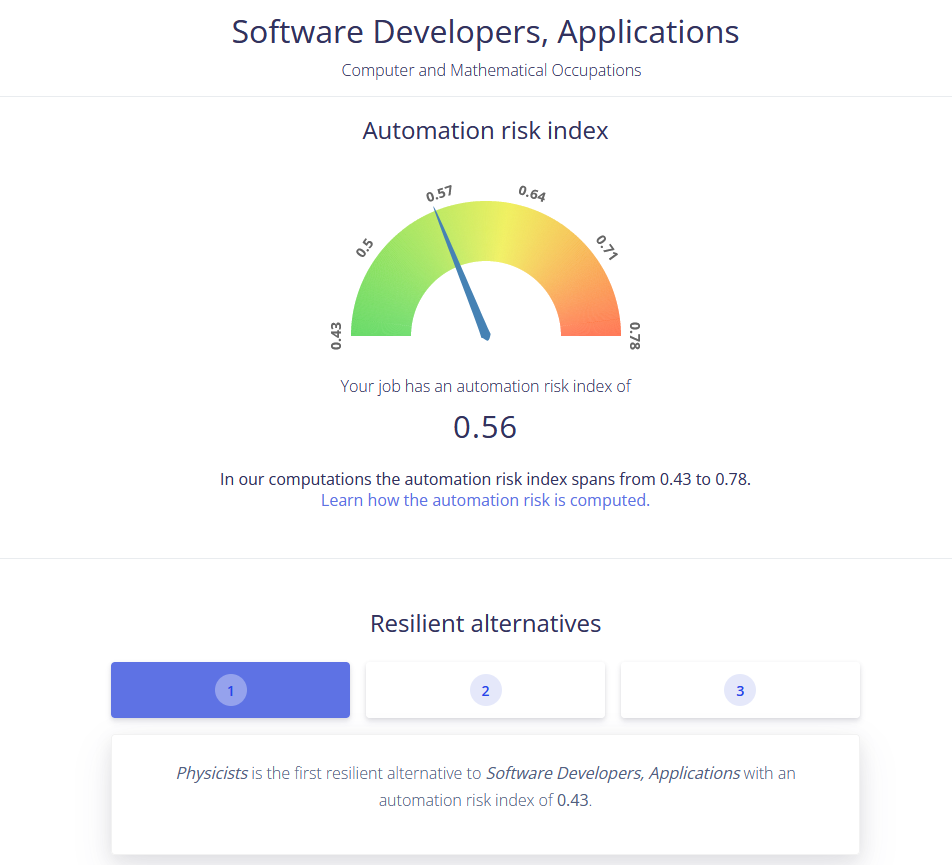 Figure 1: Automation Risk Index for an Application Software Developer according to the EPFL research tool.

Fortunately, it is not all doom and gloom. Similar predictions were made since the industrial revolution started, but in the end, not that many jobs were lost to automation but rather tasks were shifted. Actually, automation improved the life of most workers in the past and made their jobs better and less dangerous. Also, the Industry 4.0 automation wave had seen a lot of bad predictions, like robots and AI will replace many jobs, which was highly exaggerated. Surely there will be job losses, but new jobs will also be created and it’s part of humanity’s constant evolution and progress. Industries in the US are already facing workforce shortage issues, so it might not be that bad when slightly more jobs will be lost due to further automation than created as Forrester is predicting for the US job market: “New job creation will limit net job losses. In modeling the entire job market, we find that new jobs will appear to replace many of those lost to automation. Some of these will be professional services and information positions; the automation economy will drive some of these jobs. Others will be in newer sectors like renewable energy, green buildings, and smart cities/infrastructure. The 9.63 million jobs created will reduce the number of job losses from 11.06 million to 1.42 million jobs by 2032.”

Chess grandmaster Garry Kasparov once said: “The teams of human plus machine dominated even the strongest computers. The chess machine Hydra, which is a chess-specific supercomputer like Deep Blue, was no match for a strong human player using a relatively weak laptop. Human strategic guidance combined with the tactical acuity of a computer was overwhelming.”4 That’s exactly our approach at Reply too, where we don’t focus on automation to replace humans but rather see the larger benefits from the team play of robots and humans. Our broader Reply Network is at the forefront of the robotics revolution and we are one of the few companies that owns multiple Boston Dynamics Spot robots being part of the Early Adopter Program working on multiple exciting projects. We also spoke about this during our last Ignite session and announced our deeper partnership with Microsoft and the globally managed partnership with the reference architecture for autonomous mobile robots.

We are also working together with Leica and their amazing LiDAR scanner family, including the brand new UAV systems like the autonomously flying LiDAR drone BLK2FLY, BLK ARC, BLK2GO and more that capture the real-world with laser scanning. We can then take the acquired 3D data from the reality capture process as a so-called point cloud, which we can then visualize natively with Spatial Computing devices like the HoloLens using advanced rendering techniques like Azure Remote Rendering as we demonstrated here. This is useful for the creation of Digital Twins and the robotic Metaverse, embedding the real-world into computing, but also for 3D reconstruction and remote inspection in hazardous environments. For example, just recently our colleagues engaged together with Leica at the famous cultural heritage in Pompeii to explore underground tomb raiders tunnels that can’t safely be explored today because they could collapse. This is where the Spot robot dog came to help as can be seen in the below video:


Another important aspect of the Real-World Metaverse in combination with robots are command & control scenarios, where a robot can be remotely controlled while the user is seeing the scenery of the robot via telepresence, ideally in 3D VR. On top of that also comes the orchestration and management of robotic fleets with the Reply Robotics Platform combining the best of a hybrid workforce of humans and robots which is an important competitive advantage for the future of automation like Forrester outlined: “Five percent of the Fortune 500 will adopt automation fabric to fuel extreme innovation. Companies with advanced automation programs will obliterate — not merely beat — the competition. To reach this state, enterprises must define an automation fabric — a framework to build, orchestrate, and govern a hybrid workforce of human and digital workers — that links AI-based and traditional automation components, supported with a proactive program for innovation.”

All the mentioned made us establish a dedicated Reply company called Roboverse Reply that is working on all of these topics in collaboration with Valorem Reply and other Reply network partners. If you want to learn more about Roboverse, you can also listen to Marek’s webcast here and here, where he, along with one of our Microsoft partners, explains what Roboverse is all about.

Ready for your IoT and robotics projects? Valorem Reply can help you reach them quickly and efficiently. If you are interested to hear more, please reach out to us at marketing@valorem.com to schedule a dedicated time with one of our industry experts. We cannot wait to hear about what you have in mind and the goals you want to achieve to drive the future of your business!